Vienna, November 13, 2018 - After taking over its lubricants business from Austrian oil and gas provider OMV, Lukoil moved the European headquarter of its subsidiary Lukoil Lubricants to Vienna Lobau. Since then, the Russian oil and gas giant, which runs second only to Gazprom, has invested heavily in Vienna – and not just into the building for the new lubricants headquarter at the Danube. At a first tour of Lukoil Lubricants, Austria’s Minister of Economy Margarete Schramböck from the People’s Party informed herself on the company’s future plans. One topic during her talks with high-ranking Lukoil representatives were also the Sustainable Development Goals (SDGs) of the United Nations Agenda 2030 for sustainable development.

Lukoil referred to the fact that it has made, in the most recent past, an explicit commitment to the SDGs on an international level and has promoted their implementation as well put into place respective measures related to the 17 sustainable development goals in Austria. Ecological aspects such as participation in the Ökoprofit (Ecological Profit) Program of the City of Vienna is an important aspect of this, as is the social engagement and the support of social initiatives. In addition, partnerships have been concluded in the educational field, for instance with the Montanuniversität Leoben and the Technical University Vienna.

Oleg Tolochoko, Managing Director of Lukoil Lubricants Europe, was more concrete in explaining to visiting Minister Schramböck the company’s investments into its Vienna European headquarter: “The launching of our own shipping pier in 2016 and a photovoltaic system in September of this year are part of our ongoing efforts and investments within the framework of our sustainability strategy. The new shipping pier and the inland waterway delivery route enabled us to save more than 500 tons of CO2 in the first year alone. Our photovoltaic system will be enlarged within the coming years in order to cover up to 40 percent of our on-site energy demand.

With a current annual production of around 60,000 tons of lubricants, Vienna became an important hub for Lukoil’s European core markets. In addition, the company invests in research and development of innovative lubricants and sustainability projects. Lukoil also argued these innovations in the production process would give the company the option of the so-called “First Fill” business in Vienna – the basic equipment of new automobiles with motor oil.

Over the past years, Lukoil has consistently expanded its engagement in Austria. Alexander Matytsyn, CEO of Lukoil International Ltd., which is also based in Vienna and handles all the company’s the foreign investment business, emphasized the importance of Austria as location for the whole company. By increasing its capital by 6.2 billion Euro at the end of 2017, Lukoil International had once again strengthened its commitment, he said. Minister Schramböck underscored it was the goal of her Ministry to bring high-quality jobs and investments into the country. The example of Lukoil had turned out to be a win-win situation for companies and the business location. On the one hand, Vienna had received important economic impulses, on the other hand, Lukoil Lubricants’ marked sales increase of plus 56 percent in 2017 had shown that this financial commitment created considerable added value also for the company, the Minister noted. 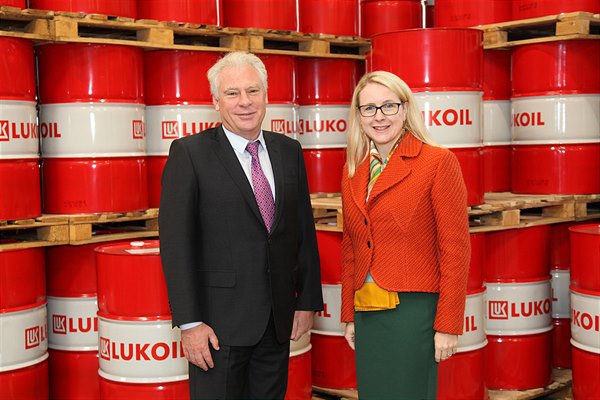